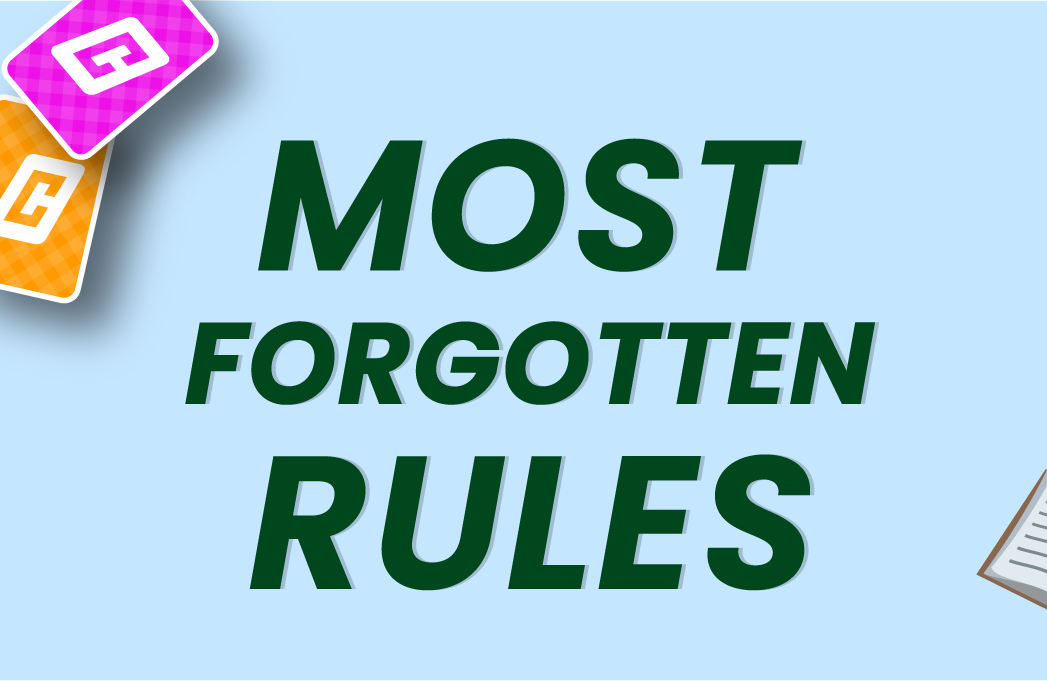 There are official rules for both, the classic version and the modern version, but you must not forget that there are different variants and even if players stick to one of the official versions, they may still apply specific table rules. Here are some of the rules that are likely to be forgotten or that can be unusual for players that switch from one of the versions to the other.

When the first card that is drawn from the draw pile is a red three, it temporarily works like a wild card: it is put in the tray (or on the table) at a 90° angle and the pack is frozen. When a player picks the pack with the red three in it, they lay it out but don’t get a replacement card.

When the last card that is drawn from the draw pile is a red three, the player lays it out like he would do in the previous rounds, but the three cannot be replaced, thus leaving the player with no new card in his hand. The requirement of starting their turn by drawing a new card not being met, the player is not allowed any further action. No melding, no going out, no discarding. If you know you are likely to be the last payer and not all red 3s are visible, you may want to make sure you take all the actions you can before it is your last turn.

When a team has a negative score, the point requirement for the initial meld goes down to 15 points, which means that any triple is sufficient.

When a wild card is discarded, the pack is frozen for both sides. The pack can then only be picked with a pair (can consist of one natural card and one wild card) that the next player has in their hands. When the pack is not frozen, it can be picked with the help of the melds that the team of the player has on the table, even with finished canastas.

This is important for players coming from the classic version: there is no such thing as mixed canastas of 7s, they always have to be pure and they need to be finished for going out. So beware of the 7s!

Another one especially for those who are not used to it: you can’t add wild cards to other melds as long as you have a started but unfinished canasta of wild cards. It can be useful for an initial meld to start with three Jokers, but you may lack wild cards later on.

You always need a legal discard unless you have a Special Hand. This can be tricky when you scrap together just enough points for an initial meld and look forward to your talon, but you must discard before you are rewarded those additional cards. When you just bought the pack and start melding, you better immediately reserve a card before turning legal discards into dead cards….

It’s impossible to go out with a Special Hand if partner has already made an initial meld.

It is possible to use 3s in Special Hands, but only in Straights.

Discover the rules by playing