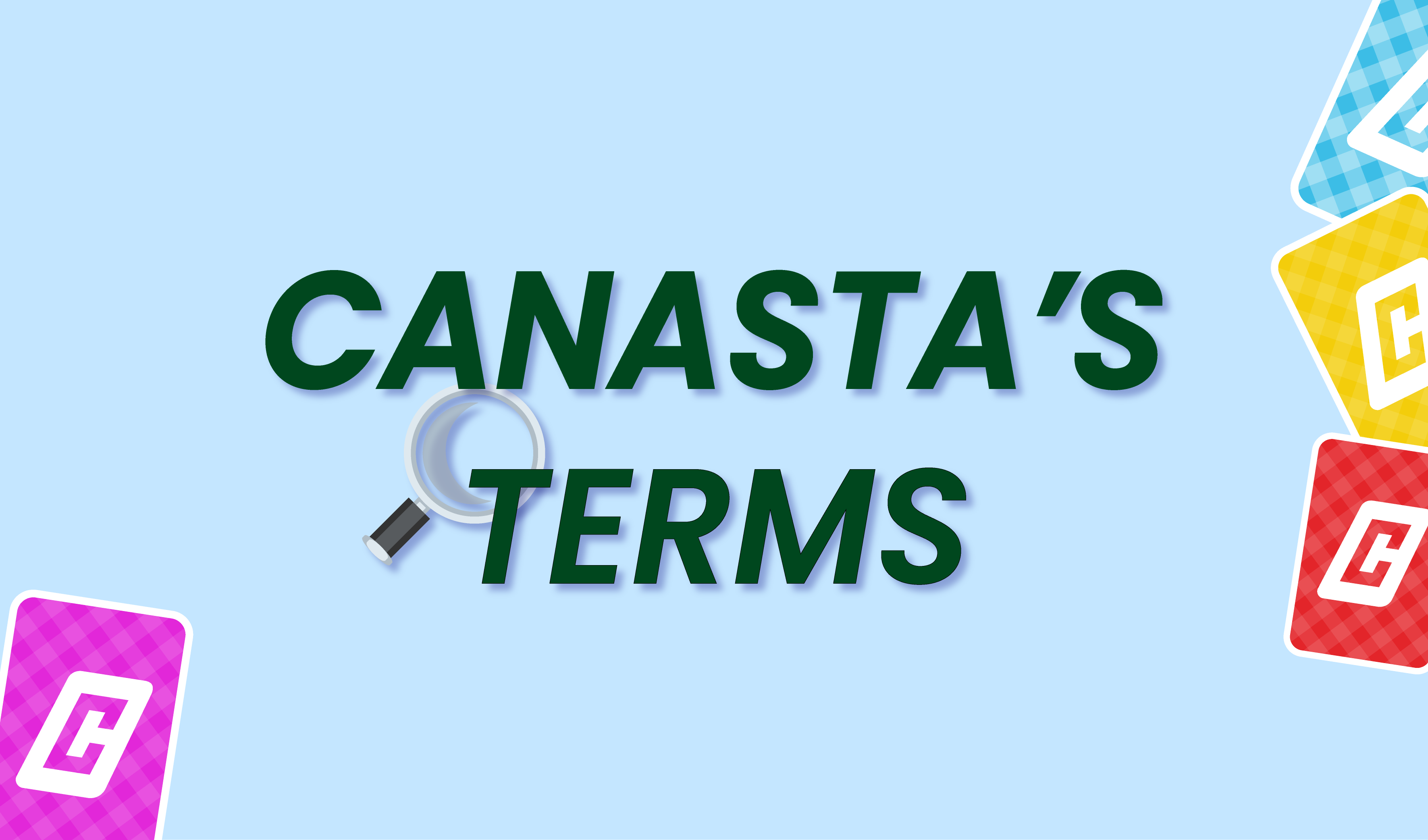 Like any other game or card game, canasta has a language of its own. Some of the terms are familiar to those from other card games, but some are really special for canasta only.

When the dealer has finished dealing the cards, the rest of the cards is put in the draw pile.

In modern canasta, the ninth card from bottom is turned. This turn card indicates from when on no more talons (a compensation of 4 or 3 cards for the first or second player making an initial meld after regularly drawing a card) are given. The pile on which the cards are discarded, is called the discard pile or pack. If a player does not draw a card but melds the top of the discard pile and therefore gets the whole pack, he picks the pack. The draw pile and discard pile can be put in a tray. We speak of an empty tray when there is no discard pile because a round is started or because it was just taken. Putting cards of the same rank together on the table is called melding. When a meld contains seven or more cards, it is a canasta.

Jokers are wild cards like in many other card games, but in canasta twos are also used as wild cards.

When a player first starts melding, he makes an initial meld. For this, they need to meld cards with a sufficient total value. A mis-meld is an unsuccessful attempt at an initial meld (not enough points or no clean triple). A mis-meld leads to a higher necessary number of required points the next time the team of the player who has made a mis-meld wants to make an initial meld in the same round.

In modern canasta, when a canasta contains 7 cards, it is finished and no more cards can be added. Cards of equal value as those in the canasta are then considered dead cards. Dead cards cannot be melded anymore.

Sevens, Wild Cards, Aces and Dead Cards are commonly referred to as SWADs. SWADs may not be discarded on an empty tray. A card that may be discarded is a legal discard.

In modern canasta, the pack may only be picked with two cards from hands and these two plus the top card from the discard pile must be added to existing canastas. The consequence is that when a team has already five or six cards in a meld, cards of that value are safe discards for the other team. When speaking of tactics, these melds of five or six cards are referred to as fifth position. A safe discard is any card that does not allow the next player to pick the pack.

In classic canasta, wild cards are special safe discards because they freeze the pack. A frozen pack can only be picked with two cards from hand, not with already melded cards or canastas. When a player can meld all of their cards (including a legal discard in the modern version, maybe including a legal discard in the classic version) and their team has the required minimum number of canastas, this move is called going out.

When a player has gone out, points are scored for the round and unless a team has scored enough points to win the game, another round is started. A game consists of as many rounds as needed for one team to win.

In modern canasta, a player can go out with a special hand as longas their team hasn’t started melding. Special hands are specific combinations of 14 cards. A straight or splash are all 14 different cards from two to joker; a zip code is a 2-2-3-3-4; a Garbage Hand is a 3-3-4-4 without wild cards; a dream hand is a special hand that is worth enough points to win the game unless the other team has a total of all the rounds that is superior.

Other special hands that are only accepted with the respective table rules applied are Miami Pairs or Palm Beach Pairs. Table rules are specific rules that are applied to a game by the players who play together (=table). There are some commonly known table rules that come with the classic or modern version but are not part of the initial rules. When counting points, the base count refers to anything with fixed values (going out, canastas, 3s, penalties) whereas the count score refers to all points counted from the values of the cards in the melds (positive) and hands of the players (negative).